Several thousand years before the first white settlers arrived in the Whittier area, Native Americans came to the Southern California coastal plain. The earliest known inhabitants were the Indians of the Shoshonean language group, who historians later referred to as Gabrielinos because of their association with the Spanish missionaries. Written history about these early inhabitants is sparse.

The land presently comprising the City of Whittier was formerly part of an extensive Spanish rancho. In 1784, the first private land grants were made by Spain to allow cattle grazing. Among those first ranchos was Paso de Bartolo.

By the early 1880s, southern California began luring thousands of Easterners and Midwesterners with dreams of health and wealth. The Southern Pacific Railroad had completed its lines to Los Angeles in 1876, and began a publicity campaign to entice people to “the land of milk and honey.” During this time, agriculture became the primary industry in California, and the “citrus culture” was extolled in promotional pieces as “a mode of agriculture totally suited to the refined middle class growers.” The citrus farmers were the new middle class, nurturing rural civility, an appealing and romantic image for many from the East and Midwest tired of the cold winters. Another strong influence in creating the southern California mystique was a popular novel at that time, Ramona, written by Helen Hunt Jackson, which inspired the imaginations of Americans with its romantic vision of vanished mission life, a sentiment that stayed with southern California for the next fifty years.

During the 1880s, the southern California legend took hold of the nation’s imagination. In 1885, the Atchison, Topeka and Santa Fe Rail Line reached Los Angeles, and a fierce competition erupted with the Southern Pacific Railroad. Real estate speculation was a great stimulus to westward travel, bringing 130,000 settlers to California from the East and Midwest in less than three years. As a result, Los Angeles’ population doubled, and new towns were created in the valleys and coastal stretches of California.

Among those settlements inspired by the westward move of the 1880s was Whittier, founded in 1887 by a small group of Quakers from the Midwest. Aquilla Pickering, a wealthy railroad man from Chicago, was chosen by his church to select a spot in California for a new Quaker colony. A staunch Quaker in his 70s, Pickering was as interested in reform as he was in real estate. After Pickering and his wife traversed the California coast for three months looking for land, he decided on a parcel of land called the Thomas Ranch near Puente Hills. In the old barn at the Ranch, the Pickering Land & Water Company was formed by Pickering and his promoters in order to facilitate the purchase of the property. The land had been owned by John M. Thomas, a sheep grazer who had bought the 1,259 acres for $4,002 in 1879. Because of the growing interest in the area, investors sold the Thomas Ranch to the Pickering Land & Water Company for $69,850 on May 3, 1887.

The first residents of the new Whittier settlement were Jonathan and Rebecca Bailey, who moved into the old Thomas Ranch House on May 11, 1887. Jonathan had been elected president of the Pickering Land & Water Company and directed the development of the new community. The ranch became the Quaker’s headquarters until a church was built four months later, and the Bailey home became the center of Whittier’s business, social and religious activities.

Once the land papers were signed, the Pickering Land & Water Company held a town meeting on May 5, 1887. One of the top priorities was to choose a name for the new settlement, which had been simply referred to as the Quaker Colony. History attributes the suggestion of “Whittier” to Elizabeth Grinnell. She thought it would be an appropriate name because the renowned American poet at that time, John Greenleaf Whittier, was a Quaker. The name Whittier was unanimously adopted.

Jonathan Bailey and a crew of surveyors worked feverishly to survey the proposed town site of Whittier so that the Pickering Water & Land Company could sell the first lots. The first Whittier lots went on sale on May 19, 1887, at the land office on Spring Street in downtown Los Angeles. Individual lots were sold from a map, a good corner lot sold for $250 and the others for $200, and no one person was allowed to purchase more than eight lots. About 160 acres were designated for town lots, and the remainder of Whittier was subdivided into five and ten-acre parcels to accommodate small citrus groves. The original town was comprised of 32 blocks, the borders of which were Pickering Avenue, Painter Avenue, Hadley Street, and Pennsylvania Avenue. 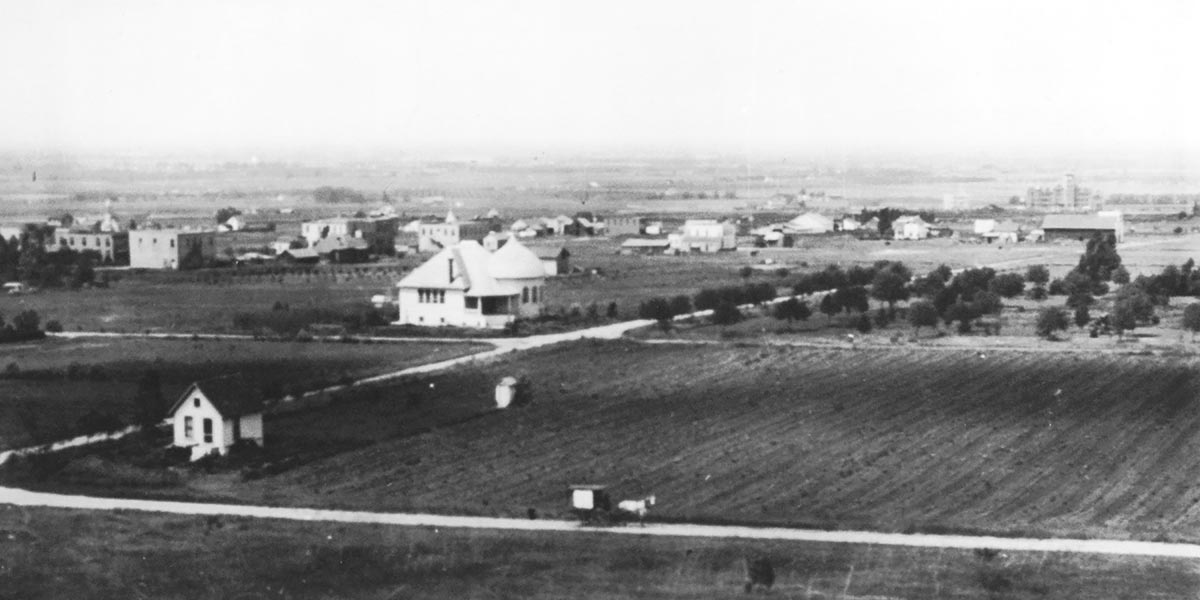 The City of Whittier is one of the oldest in the Los Angeles Metropolitan area. Incorporated in 1898, the architecture of the community at the time was generally characterized by wood-framed Victorian-style residences with decorative millwork. Quaker Brand citrus, named for the area’s first group of settlers, was known around the world. The community’s early prosperity was tied to its agriculture and oil industries. 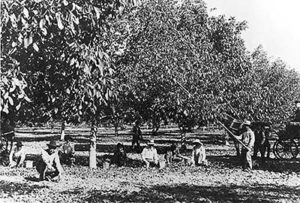 With the availability of railroad transportation, Whittier’s first commercial and industrial enterprises were established. The successful conveyance of water into the community in 1890 by Simon Murphy’s East Whittier Land and Water Company along with the arrival of the Southern Pacific, Union Pacific, Pacific Electric and Santa Fe Railroads, provided the infrastructure necessary for Whittier to thrive as a community; however, not without growing pains.

As quickly as the real estate land boom had erupted in Southern California, the inflated real estate prices began to falter, finally collapsing in 1888. Land that had sold for as much as $2,000 in the fall of 1887 went for as little as $100. During the next two years business ground to a halt and many Southern California boom towns became ghost towns.

In Whittier, the grand tourist hotel, The Greenleaf, closed and stores stood empty. Work was limited to a few jobs on the oil wells in the hills and the fruit cannery, which opened in March of 1888. The Whittier population had soared to nearly 1,200 at the height of expansion and dropped to nearly half that number by the 1890 census. Still considered a small country village, Whittier survived due in large part to two important factors: the building of a State Reform School in Whittier that provided construction and staff jobs, and the development of a viable water system utilizing several artesian wells located on the west side of the San Gabriel River near El Monte.

Whittier and the State Reform School

The history of the city of Whittier and the State Reform School is without doubt intertwined. In fact, it has been argued that the Quaker colony established in Whittier would have failed if the school had not been built there. The establishment of the Reform School for Juvenile Offenders in 1891 came at a critical time for the fledgling community. The school was located on a large parcel of land donated by the Pickering Land and Water Company in an attempt to pull the City out of the depression of 1890 and establish a solid financial base for the community. With its rural setting and Quaker heritage, reformers thought that troubled youth would excel in a community of self-reliant, industrious farmers. The Los Angeles-Whittier trolley line opened in 1904, making the area more desirable for residential and commercial development; and as luck would have it, the new reform school was situated in a convenient location just southwest of the railroad line and was served by the depot across Whittier Boulevard to the northeast, just off Hadley Street. The Pacific Electric Railway cars passed nearby and offered rapid transit to and from Los Angeles, seventeen miles distant. 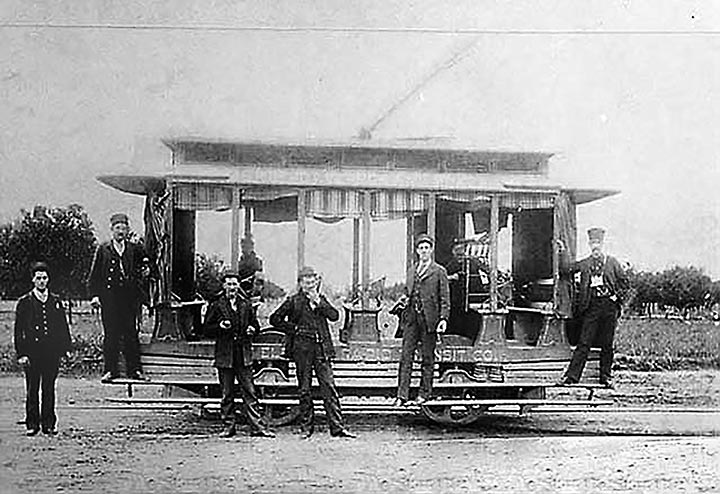